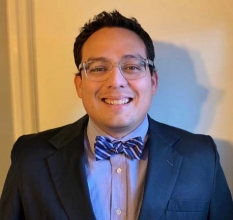 Daniel Álvarez (PhD) is originally from Honduras. He grew up between Honduras, the USA and the Philippines as his parents were missionary educators. Daniel earned a Bachelor’s Degree from Lee University in 2000. He later earned a Master of Divinity from the Pentecostal Theological Seminary. He also earned a PhD in Theology from Regent University.

Daniel’s experiences across cultures marked his life and ministry. As he has studied he has always been involved in ministry at the local church. He served as a short-term missionary in Perth, Australia. He also worked as college and career pastor in Virginia Beach, VA. He pastored in New York City from 2007-2014 where he worked with the Spanish-speaking community and established the Staten Island Church of God in Port Richmond. His ministry took place among the urban context in New York and this work informs his ministry and theology. During this time, he worked at the Ministerial Development Office of the Northeast Spanish Region for the Church of God giving various conferences and seminars for pastors and church leaders. Currently, he teaches Theology at the Pentecostal Theological Seminary where he is the Director of Global Education Initiatives and is very active at Crosspointe Church of God.

Daniel’s PhD thesis was published by CPT Press, Mestizaje and Hibridez: Latin@ Identity in Pentecostal Perspective (2016). He also translated it to Spanish in 2018. He has published several chapters and articles where he works through issues relevant to Latino Pentecostals in the US, concentrating on themes such as mestizaje, migration, race, violence, and hybridization. Daniel is an active member of the Society of Pentecostal Studies (SPS), the Fraternidad Internacional de Educadores y Líderes (FIEL), and the Fraternidad Teológica Latinoamericana (FTL).