On Wednesday, May 31, 2017, a historic event in Hispanic/Latino global education became evident. As a prelude, Dr. Michael Baker offered some background words on the main goal of the Global Education Initiative that emerged during the last General Assembly of the Church of God International held in July 2016 in the city of Nashville, Tennessee, USA.
The event refers to the signing of two documents of educational understanding by the representative leadership of various Latino educational institutions and entities of the Church of God on a global level. Among the signers on this occasion are Dr. Michael Baker, chancellor of the Division of Education and president of the Pentecostal Theological Seminary, and Dr. Enrique Adrián De Jesús, director of the Department of Hispanic Educational Ministries in the United States and Canada (USAMEH).
One of the agreements between USAMEH and the South American Seminary in Quito, Ecuador, highlights the joint administration of a practical online program (enrichment module) in Church Planting. The other agreement between USAMEH and the Biblical Seminary in Mexico, responds to needs of equivalences and transfer of credits in addition to the continuation of studies at a higher level. These and other challenges are emerging as a result of the mobilization of Hispanic migratory groups in these surrounding areas of Mexico. The main goal of these alliances is to unify offerings from the educational institutions of the Church of God globally to exchange human and material resources, strengthen interpersonal and interinstitutional relations of the denomination, and foster focused curricular integration toward specialized ministries.
The signed agreements are a strategic action step according to the FINAL Commitment contextualized to Hispanic Education in the United States of America and other Latin countries. It represents another fruit of the worthy team effort of Hispanic Education Ministries and fellow presidents of sister institutions of the Church of God in Latin America. To God be all glory, honor, and majesty expressed through the unity of His people to spread the good news of His kingdom on this earth!
The witnesses to the ceremony were as follows (picture from left to right): Dr. Mike L. Baker and Dr. Enrique Adrián De Jesus in the first row, Israel Billygraham, Juan Carlos Bixcul, Dr. Carlos Morán, Dolly S. Muñiz and Odaris De Jesus in the second row. 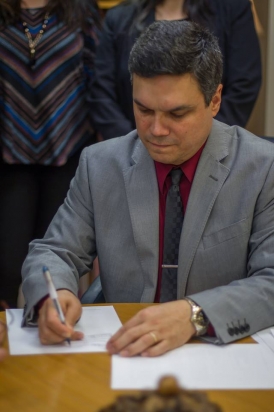 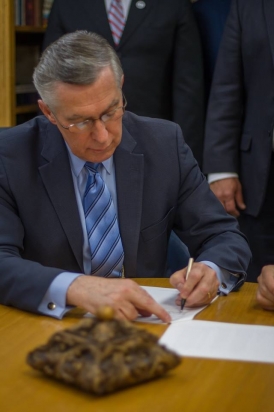